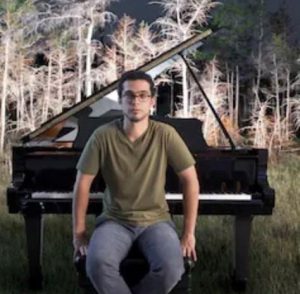 Cuban-American pianist/composer Fabian Almazan found his musical roots as a child in Havana where he first became involved in the classical piano tradition. As a performer, Almazan has developed a personal voice through the electric manipulation of the acoustic piano in live and studio settings. His compositions borrow from jazz, modern classical, and echoes of his Cuban heritage which defy easy categorization. Most recently, Almazan can also be heard in such films as Harriet, Chi-Raq, Red Tails and Miracle at St Anna.

Almazan is currently pursuing a PhD in the music department of Harvard University under the Creative Practice and Critical Inquiry Program, led by Vijay Iyer.

Vision Impaired Technology Assistance at the Library (VITAL Program)
The Nantucket Atheneum Library circulates NLS Talking Book Players which may be used while at the Library, or checked out to enjoy at home.  The Library also provides instructions in how to download audio books from the Braille and Audio Download (BARD) and Perkins Library online catalogs. Please call the library at (508)-228-1110 x101 to speak with our Atheneum to Go coordinator, or you can email glewis@nantucketatheneum.org

Assistive Listening
Assistive Listening System is available in the Great Hall. This wireless system transmits sounds directly to a person who is hard of hearing for optimal clarity and better understanding.  The library supplies receivers and headphones for use during programs.