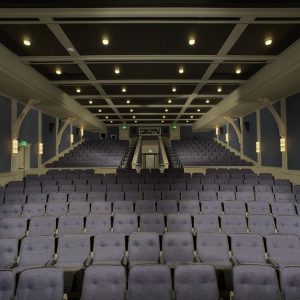 The Dreamland’s state-of-the-art facility may be brand-new, but the theater has been a part of Nantucket’s cultural history for over 180 years, continuing a long tradition of serving as the arts and community center of Nantucket.

Originally constructed in 1832 as a Quaker meetinghouse, the building also hosted open meetings in support of the abolition of slavery.  It subsequently housed a factory producing straw hats and then a roller skating rink in 1880.

Known then as “Atlantic Hall,” it was dismantled and moved to Brant Point in 1883, reassembled, and incorporated into the Nantucket Hotel.  In December 1905 the building was purchased by new owners and early in 1906 was floated back across the harbor to its present location, where it was reopened as Smith and Blanchard’s Moving Picture Show.

The non-profit Dreamland Foundation purchased the building in 2007 and went to work restoring the theater to its former glory.  Through the generosity of private donors, the theater was reinvented as a world-class performing arts center and, following a complete renovation, opened its door to a new generation in June of 2012.